It’s been three weeks since the wildfire began southwest of Fort McMurray, destroying 2,400 homes and buildings, and causing the largest wildfire evacuation in the history of Alberta.  The fire continued to spread across northern Alberta and crossed over the Saskatchewan border.  The most recent estimates reported by the Edmonton Journal peg the wildfire at 522,894 hectares on the Alberta side, and 2,496 hectares in Saskatchewan, which an Alberta wildfire information officer, Laura Stewart, confirmed Sunday afternoon. 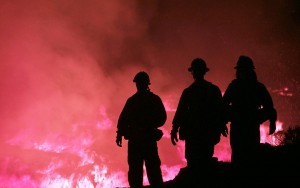 Firefighters welcomed cooler temperatures and rainfall over the weekend which helped to quell the fire and clear smoke so that they could fully assess the size of the fire.  “Firefighters are making really great progress, taking advantage, of course, of these cooler temperatures,” Stewart said.  The earliest that Fort McMurray residents are expected to be able to start returning home is June 1st which will be on a voluntary, phased basis.

At Dale Carnegie Training of Edmonton and Northern Alberta, we are dedicated to helping people reach their professional and personal potential.  Our tried and true techniques are based on the Human Relations principles penned by Dale Carnegie himself in his best-selling book which was published in 1936, ‘How to Win Friends and Influence People.’  Dale Carnegie said, “Actions speak louder than words, and a smile says, ‘I like you. You make me happy. I am glad to see you.”  We are grateful for the citizens, volunteers and municipal employees across Alberta and Saskatchewan who have taken action to help people evacuate and do everything humanly possible to thwart the wildfires.

In sum, there are 1,880 firefighters, 104 helicopters, 29 air tankers and 295 pieces of heavy equipment being used to fight wildfires across the Alberta province.  When the wildfire disaster began on May 1st, veritable superheroes rose to the challenge to bring friends, family—and even total strangers to safety.  Dale Carnegie said, “Most of the important things in the world have been accomplished by people who have kept on trying when there seemed to be no hope at all.”

Is there an area of your life that seems hopeless?  For example, do you wish you felt more confident when speaking in public so you could easily win people to your way of thinking?  Could morale be improved by strengthening interpersonal relationships, communication skills and stress management given fast-changing workplace conditions?  If so, check out the world-class Dale Carnegie Course which kicks off in Edmonton on Tuesday, June 7th; Grand Prairie on Thursday, August 18th and in Drayton Valley on Thursday, Sept. 8th.

If you or your sales team needs a proven technique to score more deals, consider enrolling in the Dale Carnegie Moving Your Sales to the Next Level which begins on Monday, Sept. 12th in Edmonton.

If your or your employees’ presentations lack persuasion and punch, the two-day High Impact Presentations seminar is as close as you can get to teaming up with a personal, public speaking coach.  This seminar will be held in Edmonton on Aug. 8th and 9th.