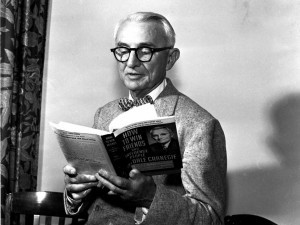 The world famous Dale Carnegie Course is our flagship program which was developed by our founder, Dale Carnegie. His tried and true human relations principles were first published in his book, How to Win Friends and Influence People, which has sold more than 15 million copies worldwide since its release in 1936.

You may be surprised by famous graduates of the Dale Carnegie course—from Warren Buffet, CEO of Berkshire Hathaway and widely considered the most successful investor of the 20th century, to Johnny Cash, one of the most influential musicians of the 20th century.

Here are a few examples of how Dale Carnegie’s Human Relations principles have been personified by additional world famous graduates.

#7 “Be a good listener. Encourage others to talk about themselves.”

Fans can easily see this principle at play on CNN where Dr. Sanjay Gupta is the chief medical expert who also reports from the field of disasters with public health implications. While Dr. Sanjay Gupta is adept at asking poignant questions, his ability to be a good listener and encourage others to discuss their experiences and opinions is what truly sets him apart.

Like Dr. Sanjay Gupta, Emeril Lagasse is an expert at talking in terms of the audience’s interests. This celebrity chef, restaurateur, television personality, and cookbook author wows audiences by teaching them how to prepare delectable dishes they otherwise would not dream of concocting. He frequently ask his audiences questions and encourages them to taste his food because he understands that a sure-fire way to engage the audience is to talk in terms of their interests.

Beauty mogul Mary Kay Ash was the founder of Mary Kay Cosmetics. She applied Dale Carnegie’s Human Relations principles at every level of her direct-sales beauty organization and considered the Golden Rule the company’s guiding principle. Mary Kay Ash perfected the one-on-one beauty consultation by training sales representatives to identify prospects’ needs and propose products that would meet those specific needs—another approach that demonstrates the importance of talking in terms of the other person’s interests.

#3 “Arouse in the other person an eager want.”

Over three decades ago, Wendy’s fast-food restaurant chain launched its iconic, ‘Where’s the beef?’ campaign which challenged TV viewers to consider the substance of competitors’ hamburgers. Rex David “Dave” Thomas was a Dale Carnegie graduate and the founder and CEO of Wendy’s. He appeared in more than 800 commercial advertisements for his restaurant chain from 1989 until 2002. In each commercial, Dave focused on his products’ attributes to demonstrate not only that his burgers were beefy, but more importantly to ‘arouse an eager want’ in the audience.

Dale Carnegie said, “Inaction breeds doubt and fear. Action breeds confidence and courage. If you want to conquer fear, do not sit home and think about it. Go out and get busy.” If you are eager to tap into your potential to reach your ultimate personal and professional success, enroll in the Dale Carnegie course.